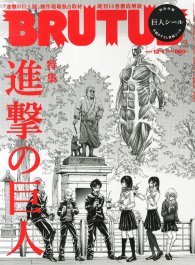 Men’s culture magazine Brutus recently did a special issue on Attack on Titan that included a lengthy interview with the manga’s creator, Hajime Isayama, in which he talks about such topics as how it feels to have produced an ultramega hit, how he came to be interested in manga, his inspiration behind the characters he’s created, and his thoughts on recent kaiju films, among a lot of other things. You may notice that the interviewer talks to Isayama almost like a psychologist; this is because he, in fact, is.

The magazine went on sale in November 2014, so the interview presumably took place sometime not long after volume 14 went on sale.

–Pleasure to make your acquaintance. I’ve been reading Attack on Titan since the first volume came out, but it’s since become such a smash hit that now you can find it at convenience stores. Do you ever feel pressure knowing that?

Hajime Isayama: Not really, I guess.

–The reality of it hasn’t hit you yet?

Isayama: It feels like reality is getting farther and father away. People say things say things like my dreams have become reality, but ever since I won that first prize back when I was nineteen, it’s felt more like reality has been growing distant.

–Did you not dream about finding this kind of success back before starting out as a manga artist?

Isayama: I knew that making a living from drawing manga is extremely tough, so my dream back then was just to make enough to feed myself with my manga, even if it never became a big hit — let alone the idea of becoming a millionaire.

–I’ve read in a previous interview that you didn’t originally think the idea for Attack on Titan would make for a popular manga.

Isayama: I thought it was great personally, but I figured that most aspiring manga artists must feel that way, and that I was just another kid underestimating how tough the industry really is. END_OF_DOCUMENT_TOKEN_TO_BE_REPLACED