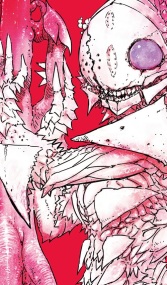 Evening did an interview with Tsutomu Nihei earlier this month because he’s been roped into being the special guest judge for their newcomer awards. It’s a short one, but it ought to hit some of the main things you’d like to hear about from him — including why Knights of Sidonia is so different from his previous work.

–Was drawing manga something you liked to do as a child?

Nihei: I actually hadn’t ever really drawn manga until I was in my twenties. I liked the pictures, but I didn’t draw manga myself. My only connection with manga as a child was reading Shonen Jump, really.

–That’s surprising. How was it that you ended up becoming a manga artist, then?

Nihei: I started working for a construction company after graduating high school, but I wasn’t very good at working in a team, and I realized I wasn’t cut out for group work. So I figured the only way for me to make it in society was finding some sort of work I could do alone. The manga industry was at its peak at the time, and it seemed like you could make a lot of money at it, so I decided to quit my job and went to New York. END_OF_DOCUMENT_TOKEN_TO_BE_REPLACED