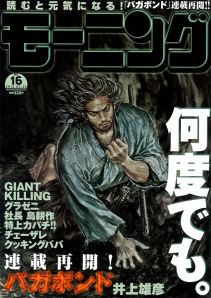 In August 2010, Vagabond went on hiatus because of creator Takehiko Inoue’s physical health, but then remained on hiatus even after he recovered and continued working on his other ongoing series, Real. Vagabond remained untouched for over a year and a half, finally resuming in March 2012 with chapters on a monthly basis instead of the weekly or biweekly schedules the manga had been following before.

The following is an abridged version of one interviewer’s series of conversations with Inoue just before, and then during, that 19-month gap. END_OF_DOCUMENT_TOKEN_TO_BE_REPLACED