Yoshihiro Togashi himself was in attendance at the 1994 summer Comiket, not a full month since the last chapter of Yu Yu Hakusho‘s lopsided final arc ran in Shonen Jump, and he was giving out free copies of a dojinshi he’d made. In addition to a meta-manga in which the main cast of Yu Yu Hakusho turn out to be actors with completely different names and personalities, a Henshuou parody in which a sobbing Togashi begs in Yamagata dialect for people not to bother him about YYH anymore, and whatever the hell this is, the dojinshi also included a Q&A with Togashi and a two-page letter in which he explained why the manga had such a turbulent ending. Both are terrific and, thankfully, someone has already done a (good!) translation. The Q&A is here and here, and the letter, which I especially insist you read, is here and here.

I find the whole thing to be just delicious. I mean, there’s this:

There were several times throughout Yu Yu Hakusho that I finished chapters on my own. It was always whenever my stress level was hitting its peak. I don’t know if this will make any sense, but the way I relieved the stress of not being able to draw my manga satisfactorily was to draw it by myself. As a result, the chapter that week would be horrific. I was just dashing off the backgrounds and characters. The spinoff chapter “Two Shot”, Karasu versus Kurama, Yusuke versus Sensui, the chapter where Yusuke and Raizen meet: I drew them almost all on my own. As one letter correctly criticized me of, I did the latter two chapters just both before they were due, 19 pages in half a day each. Maybe that makes me unprofessional, but I felt satisfied with myself doing it. At that point I’d lost all reason to keep from acting on the urge to draw by myself, regardless of what people think or how awful it may come out looking.

Wow — half a day? Let’s remind ourselves what those parts look like, shall we? First, Yusuke versus Sensui:

Yikes. And then Yusuke and Raizen: 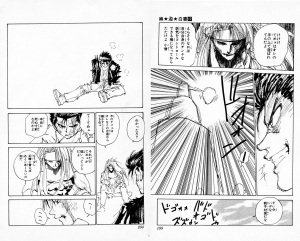 And then there’s this:

Q: What was your favorite part?

A: Itsuki’s speech inside the Reverse Man [‘uraotoko’]. Itsuki’s parting line contains a cri de coeur of how I felt at the time. (laugh)

Here’s the line he’s talking about:

“The two of us are going to go spend our time in quiet; we’ve had enough. You go find some other enemy and continue fighting.” This would’ve been around the point where he’d supposedly talked the editors into letting him bring the series to an end.

Also worth noting: according to the Japanese Wikipedia page for Yu Yu Hakusho, the series ran almost entirely uninterrupted in Jump for its four-year run except for one single issue, which is sort of surprising if true. ♦